Agent of revolutionary France in the service of the Republic of Poland. The activity of Piotr Parandier in the years 1792-1799

The aim of the project is to present the figure of Piotr Parandier – the agent of revolutionary France, who in the years 1792-1799 was active in the political arena. He spent most of his activity alongside Polish political emigrants, acting as an intermediary between them and the French government. The main source for the research will be Parandier’s correspondence stored in the Archives of the French Ministry of Foreign Affairs in Paris. The letters describe not only the political situation in Poland, Germany and France, but also relate to many spheres of history: they deal with social and economic issues, and also contain biographical and prosopographic threads. Especially the last two aspects refer to many Polish representatives of power and initiators of the Republic of Poland’s policy in the time of the partitions.

The work will be divided into three thematic blocks. The first one covers the years 1792–1794, when the agent collaborated with Polish emigrants in Saxony during the preparations for the Kościuszko Uprising. The main goal will be to show Parandier’s views on European relations, his efforts to convince his principals of his visions, and to analyze his relations with the leaders of Polish emigration.

The second aspect will concern the activities of Parandier after the Kościuszko Uprising, when he first tried to create a Polish emigration colony in Alton, and later was sent to Berlin, where he was to officially represent the French government. However, he invariably tried to convince the courts to stop the liquidation of the Polish state. The letters contain many interesting details relating to the intervention of neighboring powers, similar to the situation of citizens in Poland and the repressions applied by the partitioning powers.

The last aspect of the work will be the source studies and historical-linguistic analysis of Parandier’s correspondence. The main goal will be to publish it in the form of the source edition. A discussion on the principles of publishing similar texts will be discussed, the source itself will also be analyzed as an egodocument and political correspondence. The resulting conclusions will be used to determine the rules for issuing letters in a book form. For this part of the work and the final effect at the same time, the results of biographical research will also be used. They will be used to provide the sources with an introduction and footnotes.

For several decades, historians have been focusing on the issues of Polish-French relations at the end of the 18th century, which perfectly shows the importance of the subject of research. However, the topic was by no means exhausted, and many views were not fully consolidated. The attitude of the French Revolution to the Polish issue in the last decade of its existence is most often perceived through the prism of government policy. However, it is also worth considering the problem from the perspective of lower-ranking activists, whose very interesting example is Piotr Parandier (as a case study). The source-based approach to the problem is also important, especially taking into account the fact that modern historiography offers a very rich workshop and research tools, and the discussion among historians is currently very lively.

The subject is chronologically related to the modern era: the history of the First Polish Republic and the ancien regime; and it relates to the new order – Poland under partitions and the French Revolution. Moreover, it may be interesting for both foreign (French, German) and Polish historians, as it relates to international history. 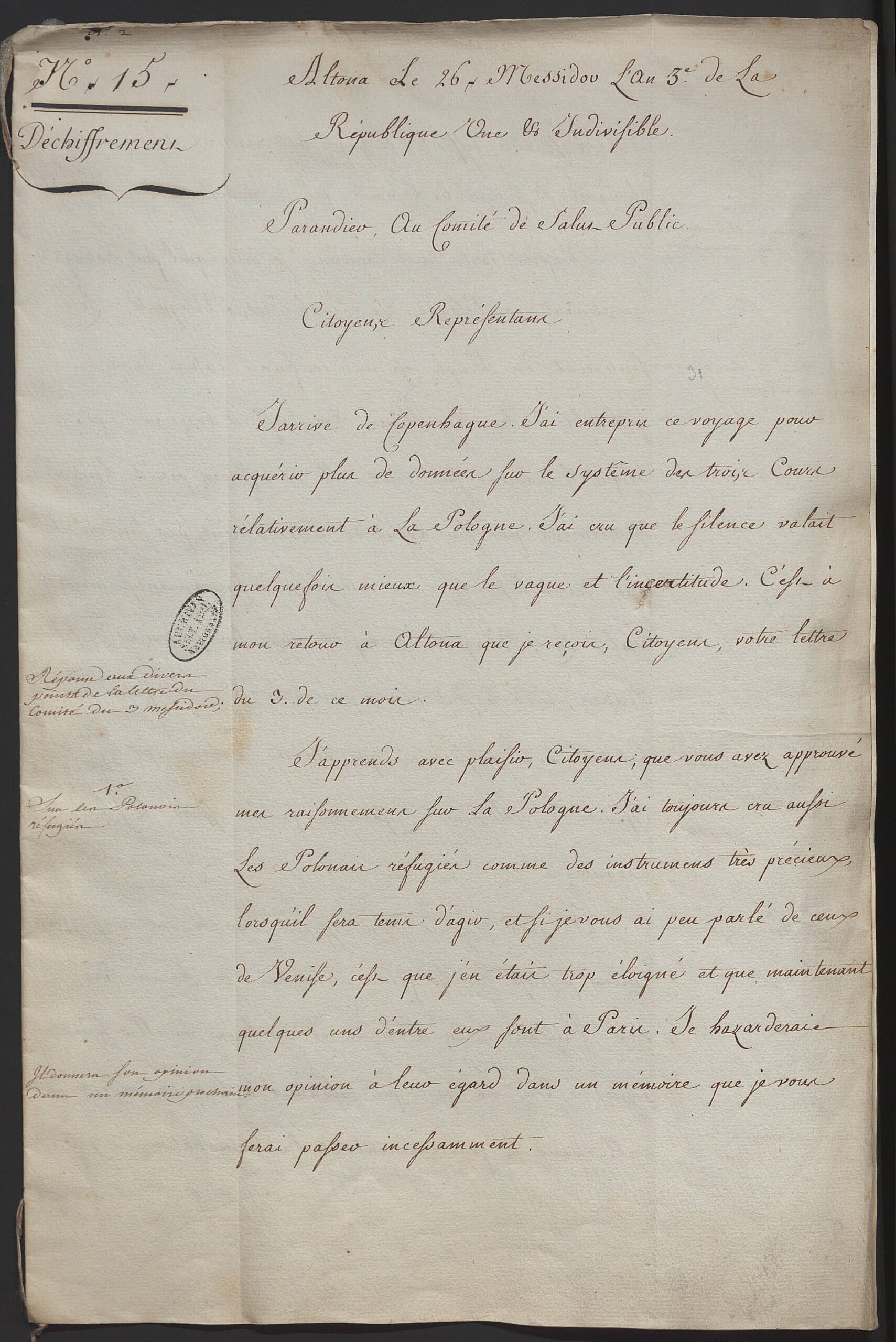