The Cult of Saints: a systematic, Christendom-wide study of its origin, spread and development

The aim of the project is to explain how the cult of saints – one of the most important religious phenomena in the world of late antiquity and the Middle Ages – originated, spread and evolved. Behind this general question there is a long series of specific issues, of which, by way of example, the following can be pointed out: What were the reasons for the successes and failures of the various cults? Why did little-known martyrs gain popularity where the great apostles failed? What helped cults overcome language barriers? How did faith in the power of the remains of the saints spread? Where and how were new forms of veneration born? What role did the cult of the saints play in conflicts between different strands of Christianity?

The strength of the project lies primarily in the way in which these questions will be answered. First, the research takes into account not only the handful of great saints known throughout the Mediterranean, but also the thousands of local figures attested in a single inscription or calendar reference. Second, the team, divided into smaller groups, collects data from all types of sources, literary texts, calendars, and inscriptions, written in the six languages of ancient Christianity: Greek, Latin, Syriac, Coptic, Armenian, and Georgian up to the end of the seventh century. These data are collected in a searchable electronic database that will be available to all interested researchers upon completion of the project.

The five-year research programme is being carried out by a team led by Bryan Ward-Perkins and comprising researchers from Oxford, Reading and Warsaw. Robert Wisniewski of the Institute of History of the University of Warsaw was responsible for the group working on Latin sources. The research, conducted between 2014 and 2018, was funded by the European Research Council (ERC Advanced Grant). 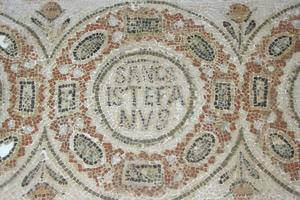